OK, it's 2am and I finally get a chance to go over the images that have accumulated in the recent days.  The progress is big, though it may not seem like it quite yet - the main thing is that the power is up!  Thanks to Ryan under the guidance of his wonderfully learned father (an electrical engineer as it happens to be) The Photo Palace now has the vast majority of electrical hooked up and running.
Here is the breaker panel that will charge our batteries and distribute AC and DC power 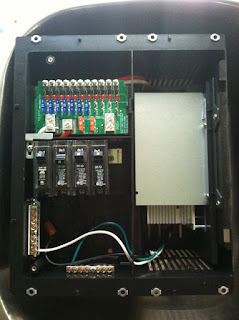 After a lot of learning and work, here is Ryan testing out the fluorescent lights that go above the presentation counter for the first time. 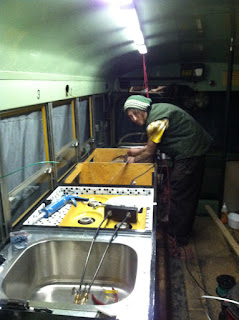 And here is what we did for the ambient lighting.  To preserve as much of the original Gillig Bus as possible the decision was made to go through the trouble of re-wiring the original light fixtures and modifying them to be high-power LED. I knew this was gonna be fun so I decided to documant it well: 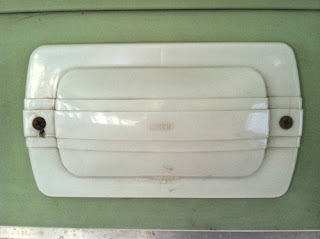 With cover off (showing the original bulb and dirt) 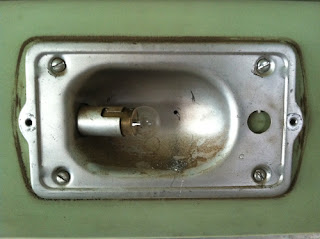 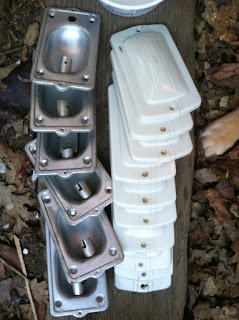 In order to install the LED the original light socket was cut off (it's hard to make a careful cut and take a picture at the same time...) 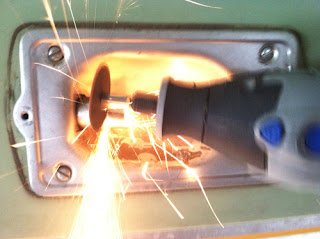 In there was placed an aluminum plate 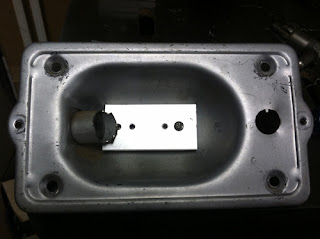 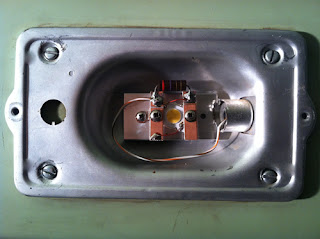 And we here is the result - a nicely glowing LED, it covered with the original cover and the Bus lit up by 5 of these puppies (here I must say that iPhone is no good for low-lights photography because it does look a lot brighter to the eye, but You, my dear reader, will just have to catch us on the road and see for Yourself) 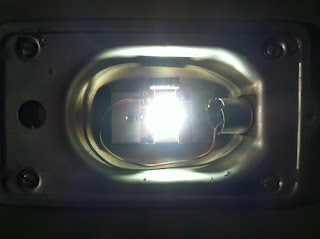 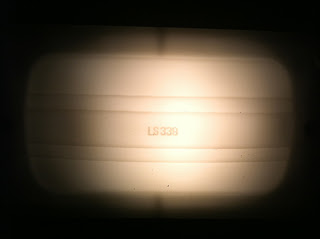 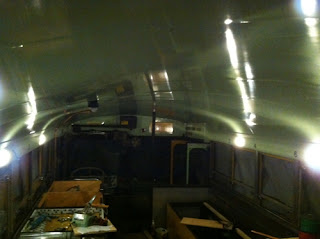 The photos did not include the peculiar moment of intense efforts when we had to fish a wire through the side of the bus under some unknown wires and under some unseen ledges.  You see, as it happens, there were a total of 10 dome lights being controlled by 2 switches by the driver.  The unfortunate thing was that they were wired so that one switch controlled three lights on each side while the other switch controlled the other two, so, if not all the light was needed, every other one could go on and there was even a choice to tn on 6 or 4 lights.  As nifty as that configuration was it did present us with a wiring dilemma.  Not only did we want to preserve the lights in the front half of the Bus, but no effort was spared to put the white light in the darkroom into the same fixtures as well.  Of course, we had to separate the darkroom lights from the front circuit and somehow connect them.  That activity involved a good amount of poking a stiff wire through the light fixture opening in hopes of getting 5 feet of wire through to the next hole.  It was not easy.  Gillig has a roll-over bar that runs all around the body.  Though we know it's there, we have never seen it with our own eyes and have only come in contact with it while drilling (and you know you hit a roll-over bar when you snap a drill bit).  What we quickly discovered was that the wiring for the lights was tucked under that bar through some small hole  and in order for us to get through we need to get our wire through not two of those openings (if you look on the right at the previous photo those opening are exactly behind the old seat numbers and we had to fish a wire through from one light to another). And not once, but 5 (!) times - one of them involving an even more daring feat of drilling a new hole in that side panel (only 1 in in diameter unlike the light fixture holes that are 6in) and trying to hit that from about 4 feet away.  The process was very humbling and reminded me of apes fishing for termites on the planes of Africa.

Now, we also have made some serious progress in the area of walls.
It took a lot of cut-outs to match the shape of the Gillig roof 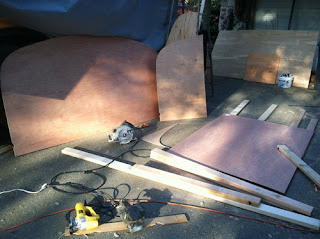 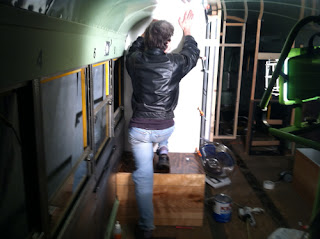 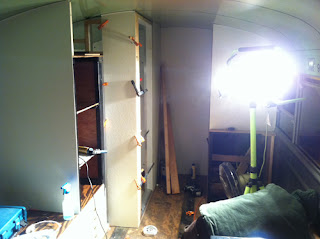 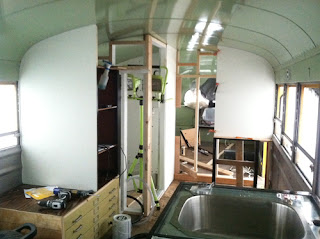 The darkroom, as well, is starting to finally take shape.  First a lot of jig-saw action was needed to make frames to fit each window (and, no, they are not identical, they probably were in 1978, but now every one had to be fitted individually with a lot of patience and finesse) 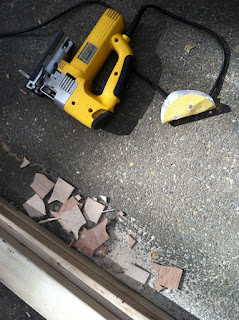 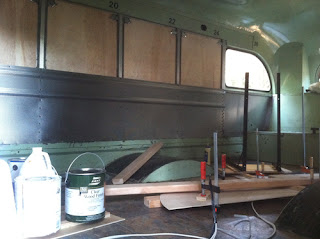 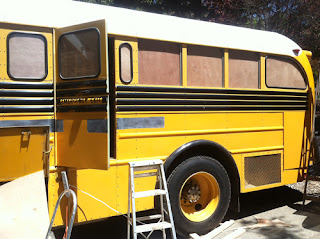 Then curtains were made. That involved a 2 hour, mostly silent, battle between a Russian photographer and a Swiss sawing machine.  The sawing machine not only got the best of me, that was easy pickings for an old veteran like itself), but also proved to be entirely enigmatic to the neighbor, a woman experienced with this technology) who happened to show up right at the moment of my frustrations crescendo.  In the end Velcro saved the day and we will have to wait until we find us a kind seamstress who'd be willing to do a trade - a beautiful portrait for some straight seams through the Velcro so it is not held in only by the sticky glue that it came with. Don't have the pictures of them yet as that just happened today.

Here is something else though that I forgot to mention.  As one might imagine the Bus was pretty dirty so is was due for a deep cleaning.  The ceiling was easy enough (though it took me about 3 hours of spraying up and breathing the 409 fumes), but the chrome was more than I could handle.
I mean look at that 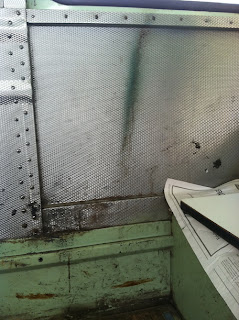 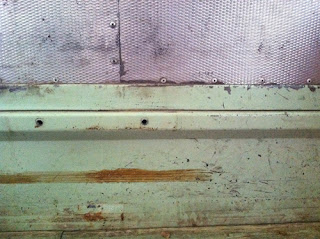 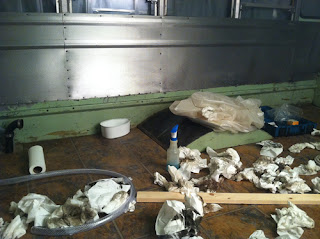 But, in the end, precious time was not to be wasted and professionals were called in and now the Bus is shiny and pretty like it should be (at least the chrome, the outside and windows are still to be detailed).  I won't even post a shot of it as no image viewed on the computer will adequately capture the way the chrome looks now, You'll just have to see it it to believe it.  But just to show what transformation one are went through here are two shots of the very back of the Bus, the darkroom rear, with enlargers sitting on what used to be the two seats) 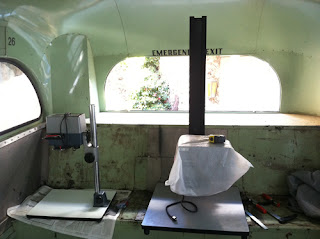 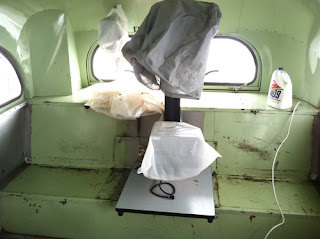 Oh, and the last of the walls was put up - it will house the space heater, have a little table for drinks and whatnot and, most importantly, will provide a light-trap and a place for the front darkroom curtain 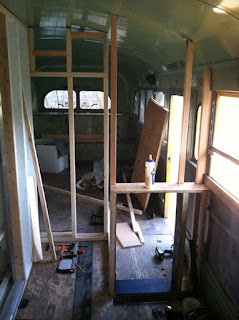 Well, I think that almost does it for construction.  Table tops are ready for pick-up, counter doors are drying in the garage ad the cushions will be ready this week.  Home Depot screwed us over and delayed the shipping of out flooring, so we will install it on the 3rd of May.

I do have some new developments in our plan to share with You, but it's already 3:30 am and I better hit the hay - tomorrow is a big day, possibly our last day parked at Ryan's place.

Good night.
AO
Posted by The Photo Palace Bus at 3:30 AM