It’s been a while since I posted, but I think a whole bunch of folks, both those who are just getting into wet plate process and those who have worked with it for a while, can find some benefit in all of at least some parts of this relatively extensive test..

Pushing your own boundaries beyond the technical comfort zone almost always results in improvement of your work.   It is with this goal that I set out to do such a test.

For the first 3 years of my collodion practice I worked solely with Old Work Horse formula and used the same developer, which I always mixed myself.  That combination worked very reliably for me and with it I settled into a nice and comfortable pace.  Last spring I decided to broaden my horizons and push myself a little further.  I ordered an all-lithium UVP#3 formula from UV Photographics.  Advantages were touted to be faster exposures and long shelf life with no noticeable decrease in sensitivity.  I found both of those to be true, though I must say that I don’t mix a lot of it up at any one time, so maybe at most I let my UVP#3 age for about 2 months or so.  Now I am getting to the point where I want to push my image quality a bit more and so I wanted to look for new collodion mixes.  At the same time I realized that there is a plethora of various developer formulas available both in modern and historic literature.  While some of these developers are touted as being better for warm weather, which is rather important to me as I often shoot in Southern California desert, others proclaim to give more neutral or metallic look to the final image.

Inspired by these possibilities I contacted Brian at UV Photographics since he makes SEVEN different excellent formulas.  Brian suggested I try 3 other formulas and also asked me to test a new one he’s been working on for the past year and which is yet to be named or go on the market.  To make my test more diverse, and just to make my life a little more complicated for the sheer fun of it, I then selected two, new to me, developer formulas from over a dozen easily accessible available ones. 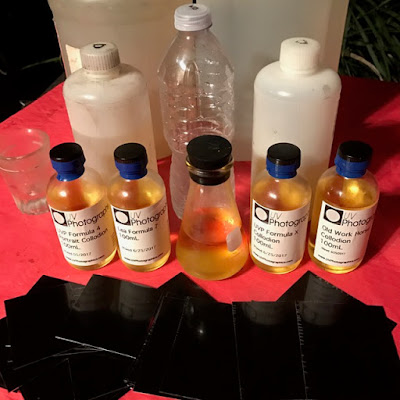 So, how would I go about determining which collodion would be most responsive to light and at the same time see which developer gave me the brightest highlights?  After thinking about it for a bit I devised the following procedure.

Step 1 - I wanted to see how reactive each developer was with each collodion and what would be my maximum development time with each of the 15 resulting collodion/developer combinations.  Collodion will give you brightest highlight if you carry on development to the maximum time possible.  Of course, you don’t want to go overboard with development and have overdevelopment fog set in within shadow areas.  Figuring that out is actually relatively simple – take a plate, coat with collodion, sensitize, do not expose, pour on developer and let it sit on there for about the time you think is good (say 30sec), tilt the plate and with a squirt bottle wash off developer from the bottom 1/3 portion, let the rest of it develop for another 5 or so seconds, start washing it off from the middle section, let the top part develop for another 5 or so seconds and wash off the rest of it.  Ideally after fixing you will see the 30 second be perfectly black, 35sec part may have a tiny bit of fog, 40sec part will have obvious fogging.   If that’s the exact case then your maximum development time is somewhere between 30 and 35 seconds.  If all sections have fog – repeat the test with less time.  If all the sections are black – repeat the test with longer times.  I was able to accomplish testing 15 collodion/developer combinations with 20 little plates (mainly because two of the developer formulas I have never used before and had no point of reference as to what development time to test around).
Note – with every formula your maximum development time will vary depending on developer temperature of developer and ambient temperature as well.  Thus, ideally, every once in a while, you might want to waste a plate and do that test whenever something changes. 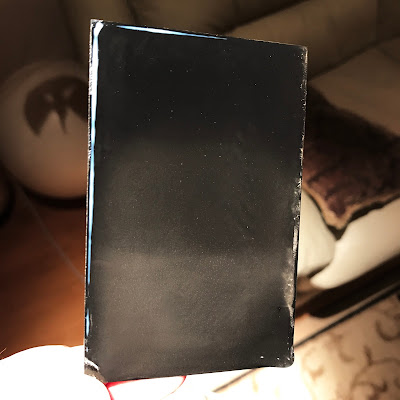 Step 2 – Now comes determining if any of the collodion formulas are truly more light-sensitive and seeing how different developers affect the image.  I set up a still life and a couple of stationary Photogenic flashes were hooked up to a modern lens (210mm Fujinon-W).  Aperture was kept the same (f8).  Then all the 15 combinations were exposed exactly the same and developed for the times I figured out in step 1.
To figure out how far to put the lights or what power setting to give them I used a light meter and my previous experience of how Old Work Horse would work with my usual developer.

Here is a photo of my little still life setup and 15 resulting plates.  The plates are arranged in the same order as written down in the table for step 1 above.  Way at the bottom of the post is a full size render of the 15-plate grid in case you want to look closer at detail. 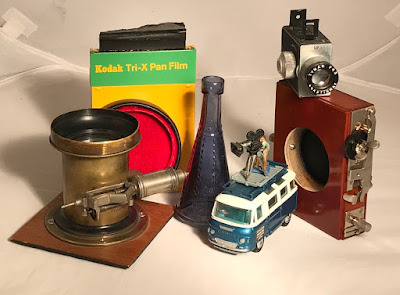 A few more technical details about the above results.
All of the 5 collodion formulas tested were mixed 2 weeks ago.  As they age they will probably show a lot more difference in speed and contrast.
First off – these plates were copied DRY on a Polaroid MP-4 copy stand using Canon 5D Mark II camera.  Applying different VARNISH will of course have different effect on final plate tone.
To keep color balance and curves consistent I first photographed a color test target, then in Lightroom I balanced that target and applied those same settings to all following images.
KCN fixer was used on all plates, 1.4% solution.
Not all the pours are perfect... In the shuffle during the wash I did manage to scratch a couple plates... I guess a few weren't washed all the way, so there's yellow stains... For all those imperfections that may offend your eye I am truly sorry.

One more short note.  As I mentioned previously, for the first 3 years of my wet plate practice I used all exact same chemistry – OWH collodion, my modified developer formula, KCN fix and sandarac varnish.   Lately I went to look for a specific image and stumbled upon come of my earliest plates.  To my surprise the tone of most of those plates was almost entirely neutral, while almost no matter what I do recently all my plates are coming out rather warm-tone.  This makes me think that along with everything silver nitrate bath has a very strong effect on final tone of the image.  After all, with all the other chemistry being completely consistent it is only the silver bath that has changed – I do maintain it regularly, but it basically has the same silver in it with which I started in spring of 2013.

I am not going to drone on about which of the above collodion/developer combinations I personally like best or worst – I’d rather let my readers decide on their own which tonality they would like to see in their images.  I would also like to caution that all of this is just MY TEST – your results will more likely than not vary slightly, so I highly encourage you to contact Brian at UV Photographics and get yourself some new collodion formulas you haven’t tried.  Then, if you want to try other developer formulas, go poke about the web and see what you can find.  Most all of the ingredients for various developers can be bought from Photographer’sFormulary or your local chemistry supply shop.