I haven't posted an update for a while ad tomorrow is my birthday, so I thought 'what the heck', especially since in the recent past I made a few plates that I think my readers might be interested in.

Going from newest to oldest- here's three plates I did just a few hours ago in the spirit of Harold Edgerton. 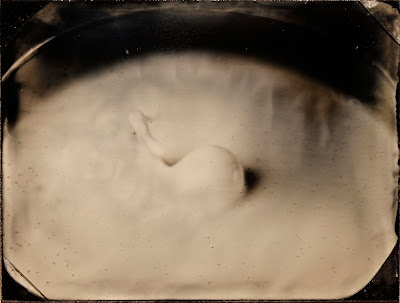 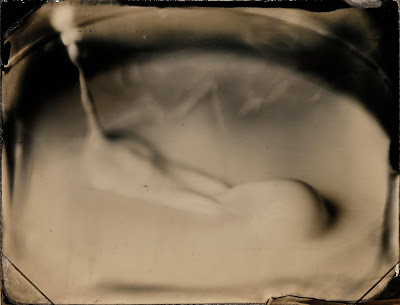 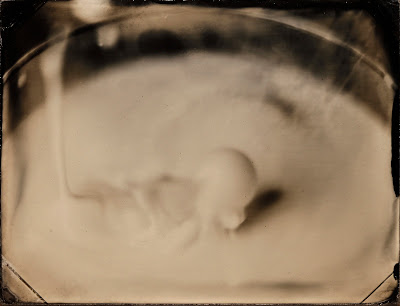 This was a lot of fun to do.  I don't work in MIT like Mr. Edgerton and didn't have access to a highly specialized short-duration flash system or a laser beam for my shutter trigger, but the above shots show that it's possible to not only do this by eye, but also to use wet plate collodion (with it's notoriously slow sensitivity).  I actually did this once before in college somewhere around 1998.  Back then I used traditional color negative film, a Mamiya RZ 6x9 camera, Norman power pack and dripped black paint into a tray filled with yellow paint.  From the 9 exposures allowed by the camera for on one roll of 120 film back then I got 3 usable images (3 were too early and 3 too late).  This time I used my trusty Zone VI 4x5, 178mm Aero Ektar lens and White Lightning model 3200 strobe.  I dropped a marble into the liquid with the left hand and with the right tried to push the test button on the strobe just at the right moment, after the marble has gone under the surface.  The ratio of success in that are was just about the same as in college - I did about 13 tries and in 5 of them the correct moment was captured.  However, because had to shoot wide open at f2.5 and the depth of focus at that point is razor thin, two of those plates had the action captured in the soft are of the frame and they were not worth keeping.  Still, I'm glad to see my reflexes have not dulled over the past nearly 20 years.  Here is my setup for the shoot.  Notice how close the flash head is - that was done in order to get the most light with the lowest strobe power possible because flash duration actually decreases as the power goes down. 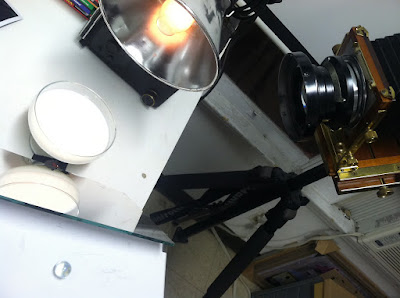 Here is another few shots from the recent past that I consider of interest.  During the August night of the full moon I found myself sleepless and because there was nothing else to shoot I decided to point my lens towards our nearest celestial companion.  A widely known fact of which not too many are aware of is that for a proper exposure of the surface of the moon one needs to shoot it with the 'sunny 16' rule and just open up one stop - that thing is bright!  It's no wonder that as far back as 1840 John Draper was able to capture the first image of the moon using an even slower daguerreotype process.  Alas, I don't have access to a tracking telescope fitted with a special projection eye-piece.  However, with an ordinary 24in f11 Goerz lens on my Kodak 2D 8x10 I was able to have exposures in the range of 2 seconds and that's plenty fast enough to have the moon come out sharp.  Unfortunately that length of a lens only allows for the image to be about 1/4in in diameter.  I still really liked the tintypes and used vintage tintype cases with brass mats for presentation.  Here is one of them.  The plate is a tiny 1 3/8 x 1 5/8in with a 1/4in moon on it. 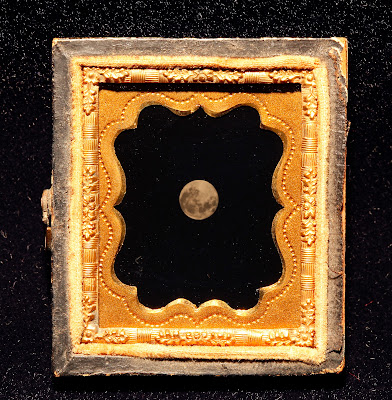 Two of the three plates made that night were offered for sale on Etsy and were purchased within hours of them being posted.  Inspired by that success and pushed by the ever-present desire to do better I went at it again during the full moon of September 27th.  This time I used a vintage 1898 Zeiss Tele-Tubus IV lens outfitted with a 225mm Protar in the front and a 100mm dispersing negative element in the back.  My focal length was a whopping 1800 or so (still waiting to do a curve graph to figure out what Delta 11.1 would translate to on that lens) and my aperture at that point was about f22.  To my surprise (partly because I used ultra fresh collodion) I was still able to get away with the same 2-second exposure and on the second try I got the plate that you see below.  This time the moon is a solid 3/4in around and again I mounted the tintype in a vintage /16th plate case, so the plate itself is 2x2.5in. 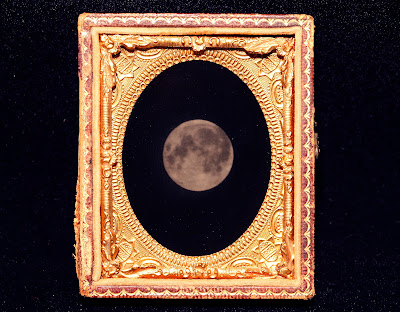 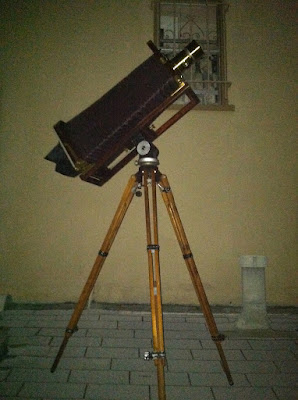 Setup used during the September shoot.


The above is currently available for sale at my Etsy shop and I do hope it sells soon to allow me to build a special setup that I have in mind for another attempt where I will try to make the moon MUCH bigger on my plates.

Well, that's about it for now.  Other than the images posted here I have been doing a lot of portraits and some landscapes.  I have also started to do more wet plate negatives with the hope of soon learning carbon printing.  My friend Race Gentry has also been tutoring me in the art of daguerreotype photography, but I'm very far from being anywhere near proficiency there...

All the best to all who read this!

Anton
Posted by The Photo Palace Bus at 10:03 PM No comments: