I know this topic is covered here and there and everywhere: in school and online, in workshops and lectures, on street corner posters and graffiti under freeway overpasses…  However, one way or another this topic seems to either elude a lot of photographers entirely or perhaps they ignore it knowingly.  Either way, after continually seeing tight headshots done with lenses possessing an obviously incorrect focal length, my personal OCD has reached a boiling point and I decided to finally do this little post complete with a demonstration.


First off – let’s talk about what I mean by ‘correct’ and ‘incorrect’ so nobody accuses me of being an old-fashioned-purist-photo-nazi.  Let me be the first to acknowledge that in this topsy-turvy world of postmodernist art in which we live in many traditional barriers are often broken for the sake of creative concept.  I completely understand that some camera operators may purposefully chose a lens that distorts facial features in order to communicate more clearly some bizarre concept they conjured up.  Maybe they want to create a series of portraits that make an unsuspecting viewer feel as a fly that is about to land on sitter’s forehead…  Perhaps the visual effect is to relate one’s closeness to the sitter and thus communicate the unbearable suffocation of an individual due to overpopulation…  Or what if the elongated nose is meant to show how many individuals stick that body part in other people’s business?  Surely any of those scenarios would be fine and entirely understandable provided a clear explanation.  What I refer to as being ‘incorrect’ are instances where eager image-makers hold portrait sessions for monetary reimbursement from their sitters and create Pinocchio-style head and shoulder likenesses by dozens at a time.  The gullible masses are often uneducated as far as technical merits of photography and, even when they see that ‘something isn’t right here’, are more often than not too polite to bring up the topic directly.  But I would wager 10:1 that most of the good folks that come in to have their portrait made would rather have it done with a lens possessing a proper focal length for the given camera format.  After all and understandably so – they just want to look their best and not be caricaturized.  With that said, let’s dive into the nitty-gritty of portraiture and lens selection.

The rise of grotesquely distorted portraits in my little universe of large format photography can be most likely attributed to the following.  A lot of people are getting into the field on a limited budget and are influenced by seeing beautiful images done with 19th century Petzval lenses.  This is especially true for those who work in wet plate collodion medium – after all Petzvals are some of the fastest commonly available large format lenses and they also have a very specific bokeh that is favored by many, including yours truly.  However, the price tag on longer Petzvals goes up exponentially and so a lot of people get a lens they can afford and tout that it ‘covers my plate at portrait distance’.  Hearing this almost always means that the lens they have is too short for making portraits, but, yes, if they rack out the bellows to focus about 3ft away it will indeed cover their plate…  I don’t know what the remedy is for those who can’t afford a proper focal length lens – maybe just sticking with a modern lens for now until a vintage one can be afforded is the best course of action.  After all f4.5 or 5.6 is not THAT much slower than f3.6 or 4 and the sitter will only have to endure a doubling of exposure time in return for a much more flattering portrait.  Either way, just because your lens will ‘cover at portrait distance’ does not make it a lens suitable for portraits.  To top it off in the world of wet plate there seems to be a great tendency to create ‘passport photos’ – head and shoulders portraits, which showcase distortion in all it’s ugly glory.


I feel a small, admittedly simple visual explanation of why portrait distortion happens when using a lens that’s too short for a given image format would be helpful.   Described verbally it occurs simply because a lens with a shorter focal length, in order to create a head and shoulders portrait, will require a camera to be placed closer to the person than one with a longer focal length.  Hence whatever facial feature happens to be closest to the lens will take up more real estate on the film plane then those featured that biologically occur farther away.  The one unfortunate body part that most often bares the brunt of this inevitability is the nose.  In the drawing below you can see how the distance from lens to the nose vs. eyebrow changes with various focal lengths – the shorter the lens the greater the difference in those distances and the bigger the nose will appear in the photo. 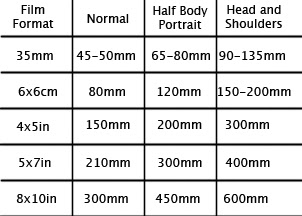 Theory is great, but a practical test should help to solidify this concept visually.  For my test I used a traditional ‘quarter plate’ format – 3.25x4.25in.  For that format the normal focal length is a widely available 135mm (5.5in approximately).  For my model I employed my lovely and always cooperative girlfriend, whose facial features are very proportional and therefore will be easy to demonstrate my point upon.  I did not concentrate too much on lighting and posing and instead emulated the ubiquitous ‘passport photo’ cropping that dominates wet plate portraiture for some unbeknown to me reason.  I have also done my best as always to create the best possible wet plate image, but this was not a test of how clean I can make a plate, so don’t fixate on a few artifacts that are present.


Current average prices for vintage lenses do allow most people to find an affordable 6in Petzval (normal focal length for 4x5in), but when it comes to 10-12in ones it’s a bit harder to swing.  Moreover there is an abundance of Magic Lantern projection Petzvlas out there and those tend to be the cheapest.  Their focal length is often just 4-5in (sometimes even 3in or 3.5 as in the case of smaller Lanterns) and they barely cover quarter plate most of the time, but people buy them up, mount them on a camera, rack out the bellows to focus on a head and shoulders composition and become giddy when they discover that their 4x5 or 5x7 plate is covered.


For the demonstration below I used: wide angle 90mm Nikkor lens, normal 135mm Laak Rathenow, slight telephoto 180mm Rodenstock and to finish it off with a strong telephoto a really nice 19th century Darlot Petzval that has a focal length of about 268mm or just about our ‘ideal’ – twice the ‘normal’ 135mm.  I used all the lenses at the aperture of f5.6. 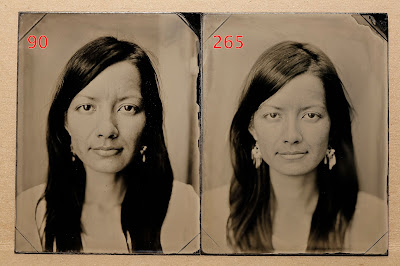 Wide angle vs. a lens with 2x 'normal' focal length 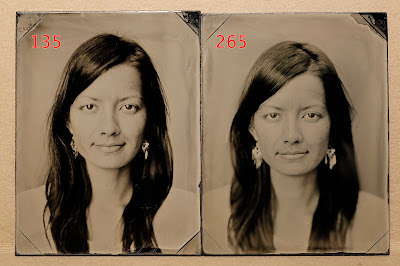 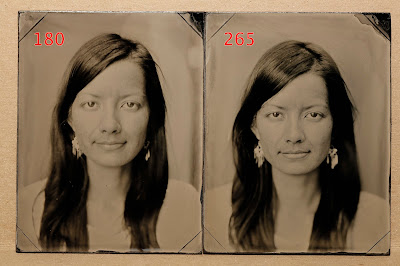 As you can see the difference is most noticeable with wide and normal lengths, but if you really look carefully it is also there in the last pairing.  If you were to do an even tighter crop in your frame than this you would see a greater difference.

I do not expect my humble post to drastically change the landscape of modern portrait photography, but I had to get this whole thing off my mind and chest and now I feel better.  I hope my readers will find some food for thought and some of them may be convinced by the demo to start saving up for an appropriate focal length lens to use in their portrait sessions.

I rarely work on a single series of images, so I decided to push myself creatively to do just that.  Living in a city of over a million people and being drawn to nature I couldn't help but to select a theme which is somehow connected to those facts.

"Preapocalyptic River" is a series of 23 Ambrotypes documenting the San Diego River, or what is left of it.   I chose to focus on the mouth portion of it - the last 5 or so miles before it empties into the vast Pacific Ocean.  That portion has over time been completely overran by civilization and nearly forgotten by the local residents.  Hundreds of thousands of people zoom above it on highway overpasses and surface street bridges.  They are unaware that below them a fragile and beautiful environment is struggling to sustain existence and provide a habitat to a multitude of creatures.
To document the state of the river now I chose glass support to reflect the fragility of nature.  For many of these images I had to go well off the beaten path, though some of them were captured right from the bridges that dominate the landscape above it.  I used only 19th century lenses to echo the times when this river ran free and unencumbered.
All plates seen below with a black border are 4x5in and those without the border are 3.25x4.25in.  I am open to exhibiting these plates or to a sale of the entire series. 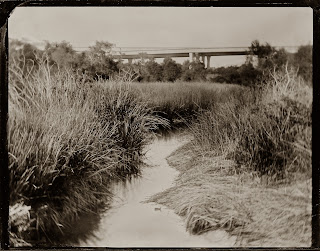 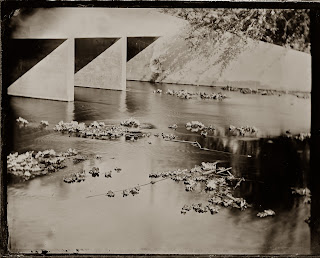 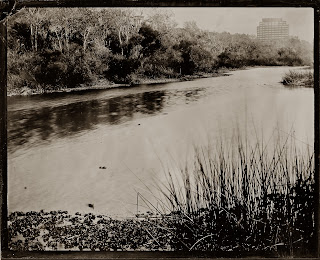 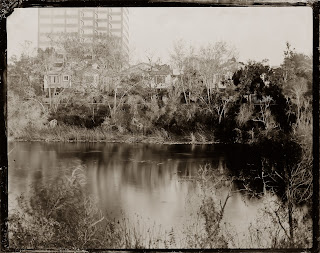 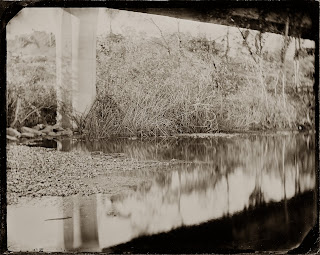 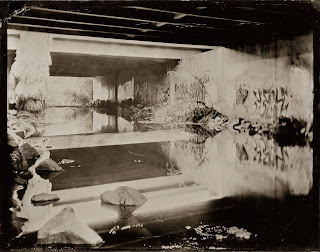 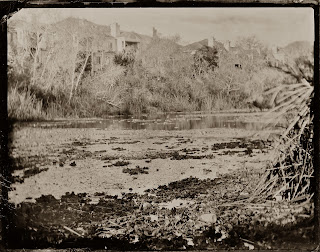 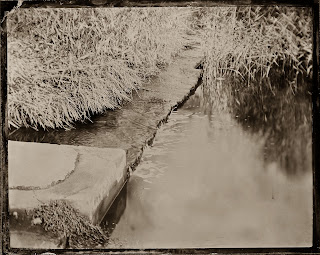 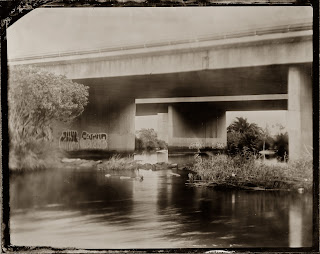 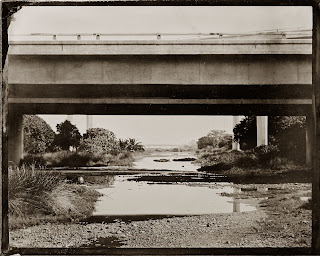 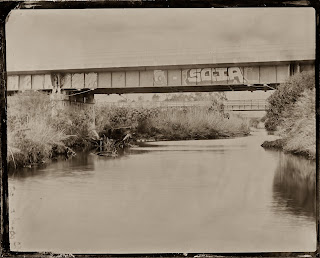 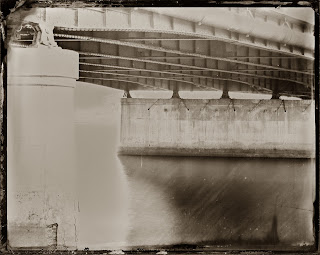 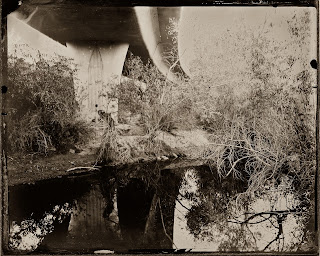 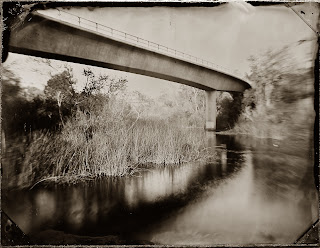 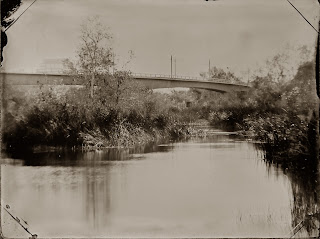 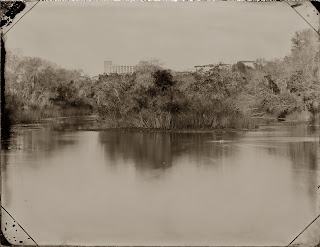 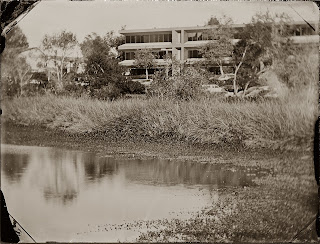 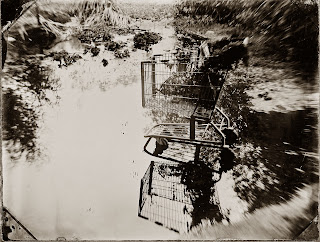 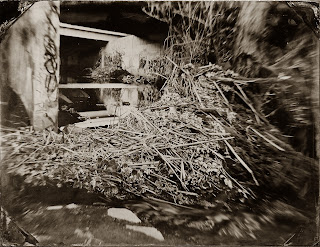 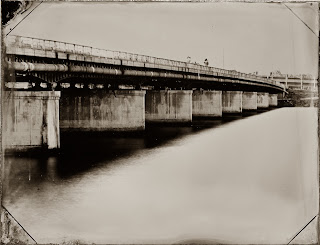 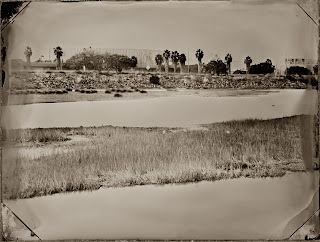 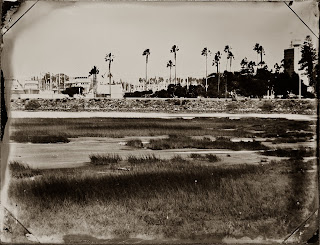 Anton Orlov
Posted by The Photo Palace Bus at 6:56 PM No comments: