Kodak Panoram #1 - There's A First Time For Everything

My recent Kodak Panoram experience has inspired me to do a little write-up for all to enjoy and hopefully sympathize with me.  I had two #4 Panorams come through my hands before, but because they use much larger roll film, which is no longer being made, I always wanted to use a #1 that takes regular old 120 film (originally it was actually 105 film, but 120 fits in there like native).

Kodak Panoram cameras were introduced  in 1900 and were made until 1926.  The #1 model covers an angle of 112° and the fact that the film is curved makes distortion-free images.  Neat! I got this camera a couple of weeks ago from a great fella up in Canada.  He did warn me that the camera doesn't fire, but the temptation of a fair price and an unfounded internal conviction that I'll be able to fix it pushed me to go ahead with the purchase.

Quick side note, which may help to explain why I'm so happy that I feel the need to put this into writing.  I have been shooting for over 25 years now, but this was the first camera that I dared to take apart and attempt a repair on.  Sure, there was that one 8x10 Kodak 2D that I got about 15 years ago and on which I wanted to refinish the wood.  I took that one apart almost all the way.  After encountering rivets vs. screws I got scared, let it sit on my desk for a few weeks, put it back together, had about a dozen little screws left over, but since it still functioned I sold it along with the extra screws and let someone else deal with it.  Plus there were no springs or levers in the 2D, so it doesn't even really count - it's just a box with a couple of rails and bellows and therefore presented no threat from the start.

When I got this Panoram it didn't cock, it didn't swing, it was pretty much a shelf queen, which was the function it performed well for the past who knows how many decades (the Canadian gentleman had a very large collection of cameras beautifully displayed in a special room).  How bad could it be though, I thought to myself, it's just a release lever and a double spring!  So armed with a set of little screwdrivers I took it apart down to the stage seen below. 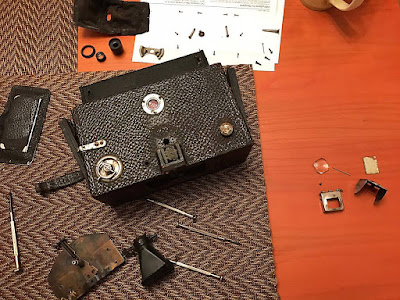 That was actually a step too far - the viewfinder didn't need to come out, but having it apart gave me a chance to clean it up.
What I found upon entry was that I was obviously not the first to have been in there.  A missing screw, some scuffing on all other screw heads, a rough soldering job on a couple of parts - all signs pointed to the fact that this camera has given someone trouble before.
Most frustrating find was the missing half a tooth on the lens shaft gear and the bent stopper arm.  In fact it was bent at such a severe angle, which resembles 45°, that at fist I thought there may have been two of them and the second one was missing.  Here's a picture of the bent arm (turns out it was supposed to be parallel to the black cone in the back) and the gear with the missing tooth. 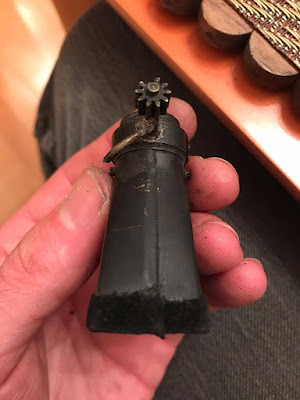 Discouraged by the appearance of the part above my spirits sank and I turned to the world wide web for help.  After a couple of days of asking around I found out that a local photographer I know actually has a working #1 Panoram, though his is an A and mine is the later D model.  Difference there are minor though and the actual lens mechanism is the same, so I drive over to his place.  After about an hour and a half of tinkering and after biting my lip and bending back that arm to a straight position while hoping it won't snap off the camera was back together.  It was still rather reluctant to fire and that required another disassembly and bending the catch on the release plate so it would actually engage with the hole on the lock and disengage from it willingly.  At the end of the day though it was working a lot better than is was before.  The missing gear tooth though makes the lens not totally lock far enough when it's in the right-facing position, so, when the spring is tensioned for it to be ready to fire, it swings a bit too far out and basically starts exposing the film before the release button is pressed.   Hence I have to use the lens only in one direction.  That means that after each left-to-right exposure I have to hold the lens back with my finger, tension the spring, cover the opening with another finger, push the release button and while continuing to cover the lens bring it over to the other side.  A lot better though than a fully non-functional camera!

The next day I loaded some film into it and snapped a few exposures.  Oh, I say 'a few' because this thing makes only 4 images per roll of 120 film!  With an 6x18cm neg though that's all you get.
Upon development I was really disappointed to see that nothing was actually sharp on there...  And I mean way out of focus.  Here are images of the 4 exposures and one looking through a home-made loupe at the detail of some wires from the top right of the third negative down. 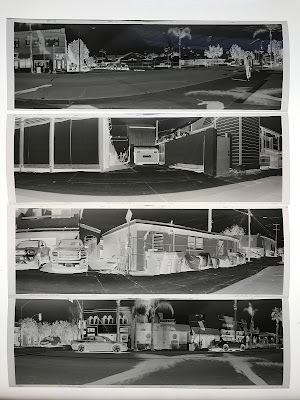 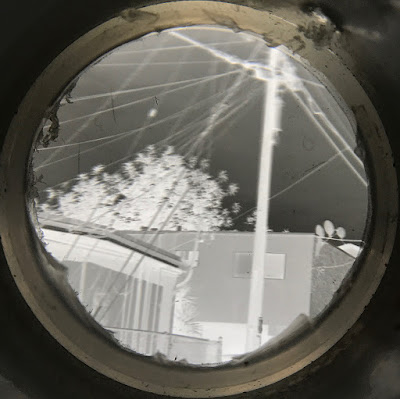 The lens was obviously set too far back because nothing up close was in focus and neither was infinity.   Time to tediously adjust lens position.   There are plans online on how to shim the lens, which someone sent me a link to, but I didn't even open them up not to confuse myself further.  I figured since the lens screws into the barrel from the back and then the barrel screws onto the part with the shaft from the front I could use those threads to position it more forward or back.

First I tried a piece of mylar from a colorless binder.  After cutting a strip the same height as 120 film would be I taped it in position along film plane. 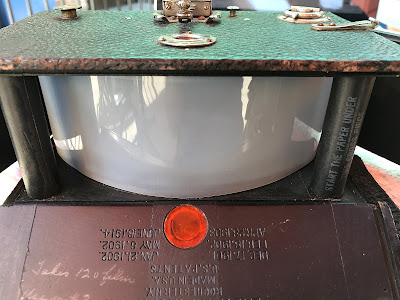 Well, that was far from ideal - the grain on there is so large that when looking at the image using a loupe it's mainly the mylar texture that I could see.   It was however obvious that the lens needed to come back a bit.  To make the image better I got armed with a ground glass loupe with a small piece of actual camera ground glass (again, just the right height so it can be pressed against the rail on which film rides) taped to it. 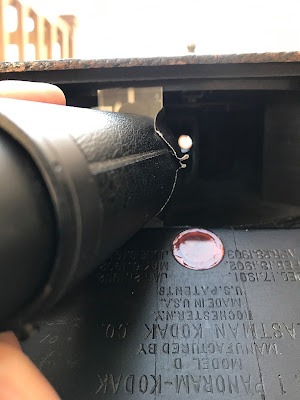 That worked a lot better.  It took a while, but after futzing with lens threads and meticulously checking if the image is as good as it can be I finally ran another roll thought it and this time looking at the negatives though a loupe the wires were a lot sharper. 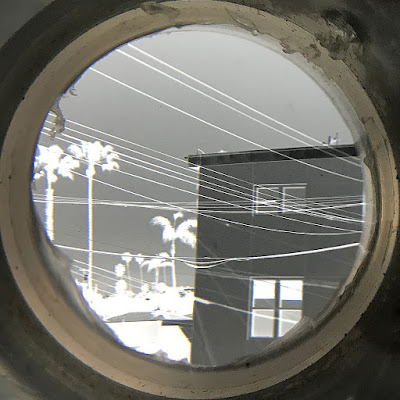 One thing that may not be visible in that final image is that, while horizontal lines are pretty darn sharp, all the vertical lines have a bit of a motion blur to them as if the world is spinning around the camera.  I'm suspecting that's a function of the fact that the lens is a simple meniscus, which aren't known to be ultra sharp, and so as the lens swings and makes the exposure it's actually projecting the image with a bit of a left to right motion.  I'm also thinking that I'm looking at these negatives with a bit of a too critical eye.  First off these weren't meant to be enlarged - back in the day they would just contact print them on AZO paper and that would look good enough to the naked eye.  Secondly I probably keep thinking it can be sharper overall because I'm kind of used to nice sharp lenses like Petzvals, Planars and modern large format glass - a simple one element meniscus is not meant to match that level of detail...

In the end though I think I can learn to live with the slight side-to-side blur.  Before I go out to areas more picturesque than my neighborhood and run another roll though it I think I'll spend another 20min messing with the focus to see if I can make it any sharper.   I actually do have some sheets of AZO left, so I'll make some prints, make decent copies of them and put a little update on here once that happens.

Another thing I'm thinking of doing.  Meniscus lenses get sharper the more stopped down they are,  There's no aperture control in this camera, but there's no reason I couldn't make a little washer to slip into the lens barrel and put a hole in there that would equal 2 stop reduction in light from where it is now.  Right now it's working perfectly with ISO 100 film, but with a lens stopped down a bit 400 ISO film will expose properly.  Making the opening smaller will not only increase sharpness and depth of field, but it may or may not also reduce the side blur effect.  Without enlarging no effect of larger grain will be seen, so I think I'll work on that.

I hope I didn't ramble on too long and some of you enjoyed at least the images.

Anton
Posted by The Photo Palace Bus at 8:53 PM 1 comment: