Last weekend, Jozlynn and I decided to take Gilli out to the mountains of San Bernardino National Forest, located slightly northeast of Los Angeles.  It's a really beautiful area and there was definitely a need for a short getaway before I go off on a cross-country journey this coming Monday.

We left Saturday evening and by the time we reached the forest it was night.  Not wanting to drive too much on a windy mountain road at night, I quickly found a place to park and it wasn't until Sunday morning that we get to Lake Arrowhead, our first destination.  As idyllic as it seemed in photos, when we got there the lake appeared to be encumbered by housing and businesses with not a direction in which the lens could be pointed where nature would appear to be preserved in it's original state.  Nonetheless, there was snow there from the storms, which passed just the day before, and Gilli really enjoyed it since she doesn't get to be in the snow often. 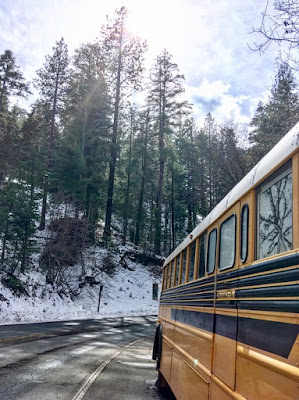 On the way down I saw a picturesque little cliff and a nice place to pull over, so I decided this would be a good place to make the first plate.  As you can see in the above image, lighting was erratic due to various layers of after-storm clouds passing over the sun at different speeds.  When I came out to the camera with the plate ready to shoot of course a thick cloud was crawling it's way across the sun...  I could have made a plate with just longer exposure, but I really wanted harder light, so I waited...  and waited...  Here I am waiting as seen by Jozlynn. 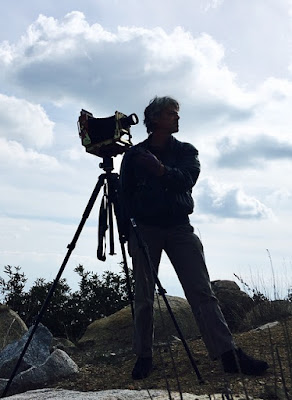 While I waited my collodion decided to dry out quite a bit along the two thinner edges and so the final plate turned out to have rather intriguing pattern of marks at top and left sides, and I think they worked out fairly well with the rest of the composition. 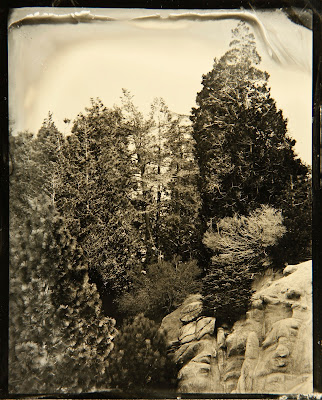 Our next destination, Bonita Falls, required us to go back down to the city in order to access a different part of the mountains.   Friday rain and high winds downed quite a number of rocks from the cliff sides along the highway.  One of those rocks, of a larger variety, decided to land on a side of tight right curve, and was apparently about 2-3 inches farther into the road than I estimated.   My rear right tire grazed it, but didn't pop. However it caught the rim, a 24.5in machined steel rim, and bent it up with the ease with which only nature can destroy manmade articles.  Air, initially in the tire at 100psi, escaped quickly and loudly in a span of under 2 seconds, and I new we were spending the night in the city, as driving a 26.000 pound vehicle with only 3 tires in the back is not a good idea.   Here's the view I was confronted with when examining the damage left by my camouflaged enemy, the rock. 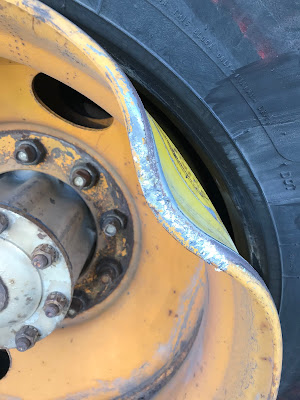 I am starting to notice a pattern.  During the 6 years I've traveled with Gilli, 3 out of 4 mishaps, mechanical or otherwise, occurred on Sunday, making same-day repairs impossible...   We had to find the nearest hotel and hunker down for the evening.  Steve Watkins, the Fort Worth lad I blessed with the Durst 8x10 enlarger just a little while ago (read about that trip HERE), helped me by shooting me over info of a mobile mechanic in the area and by 8:30 next morning I was on the phone, waking up the mechanic and trying to explain that Photo Palace Bus needs his help. By 9:30 he was on location and with a sizable sledge hammer proceeded to bang on the rim for about an hour, every once in a while pausing to catch his breath, in order to undo the damage done by a rock in a fraction of a second.  Here he is taking one of the swings at it. 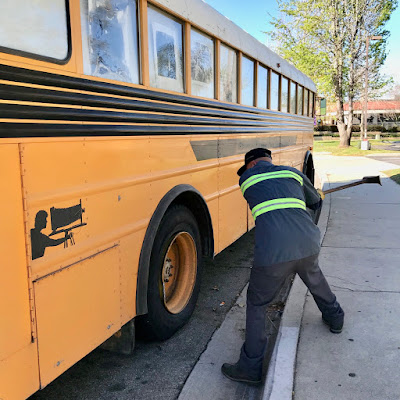 A new tire had to be put on since the wall of the old one was pretty badly damaged, but by noon we were back on the road, hading once again for Diana Falls.
In theory we were rather close, but our mistake was trusting google maps app - this was the second time it sent us in such unexplainably convoluted ways to a destination which was normally accessed by a straight road.  I'm not going to go into details of this detour, but I'll just say that some of the turns and streets I had to guide Gilli through could not be described in any other way than 'hairy'.
Even after crawling out the maze of tiny streets and asked a local for directions, we still missed the turnoff and ended up taking the road all the way to the end, where it turns into gravel and leads to a patch of rural camping sites and a shooting range.  After turning around once more I thought it was time to stop and make a plate or two.   There's a part of a canyon where yucca plants are abundant and a lot of them have dried up shoots, which extend 10ft+ into the air like nature's surreal parodies of light posts. Here are a couple of plates I made at that stop. 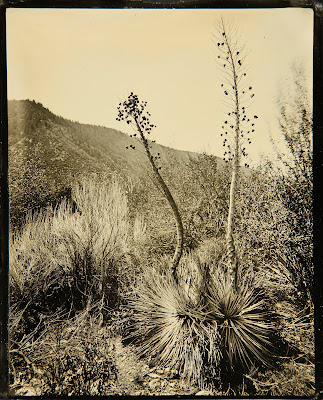 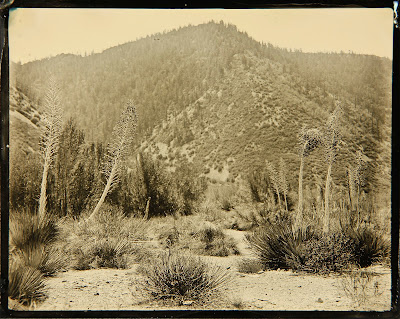 By then we were done exploring aimlessly and went straight to the ranger station, which we passed on the way, to ask for exact directions.   There we were glad to find out that not only Bonita Falls existed and weren't too far from us, but that at the closest inhabited location to them there was a nice RV campground.  Making it there in under 5min, we booked a spot, set up camp and I set out to make the following plate in nearby creek before I lost the light. 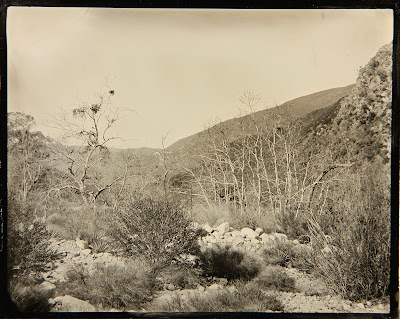 Right as the sun was starting to dip below mountain top rims we went for a hike to reach Bonita Falls.  It's an easy 20min walk up a boulder-studded wide dry wash and it would have been absolutely beautiful if it was not for layers and layers of graffiti covering all rocks along the trail...  I don't know why people have to do this, but it seems very disrespectful to both nature and other humans wanting to enjoy a limited pallet of green, brown and blue that is offered by an untouched forest. Instead, screaming bright sculls and unrecognizable characters assaulted our vision around every bend...
Bonita Falls though is still a place worth visiting.  If you can train your brain to ignore the copious amounts of modern cliff paintings, concentration of which increases as you enter the basin of the falls, it's a rather magnificent sight.  The best part about it is that the water falls along an almost perfectly vertical cliff, which can not be climbed and defaced, so looking up one is presented with quite a stunning view.   Here's Jozlynn enjoying the said sight. 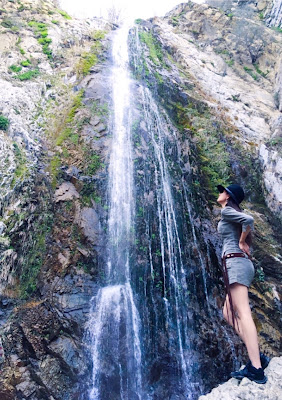 Before we left I decided to take a quick sip of the water and was glad I did.  That water has just melted off the snow just a thousand feet or so above, and it was the cleanest, most pure water I have had a pleasure to drink in a long time.   I'll definitely have to come back there with a fully portable dark box and make some tintypes.
In the morning, before heading back to San Diego, I wanted to picture some of the trees that occupied the wash by out camp.  New morning light was good and so here is the result of my photographic efforts. 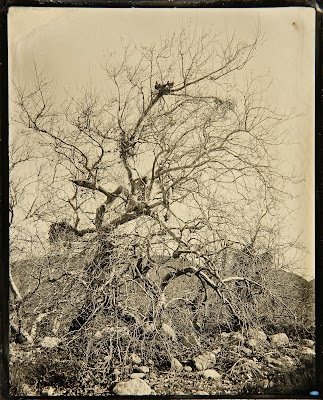 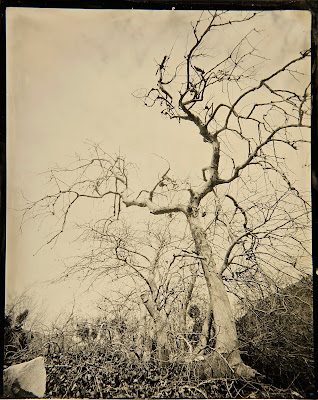 The second plate above, the one with a lonely rock in the left bottom corner, was made with a Burke and James Orbitar 4x5 Wide Angle camera that I was lucky enough to come across during the  Northern California trip of 2017. If you would like to read the story of how I came into possession of this rather uncommon piece of photographic history, you can read the blog entry HERE.   Here's yet another photo of this odd little camera, which is capable of producing some seriously high quality images. 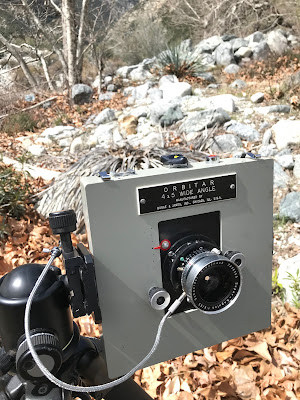 After lunch we headed back on the road, back to San Diego trying to beat LA and SD traffic.  Seeing how we were passing by Lake Elsinore we decided to swing by and check it out.  Once again, the lake itself was highly uninspiring, but just past it the road heads into the mountains and rises very quickly over the span of just two serpentine turns.  After the second turn there's a place to pull over with a view of the city of Lake Elsinore and the grid of suburbia appeared too perfect not to photograph.  I chose my Tele-Fujinon 400m lens and selected this crop. 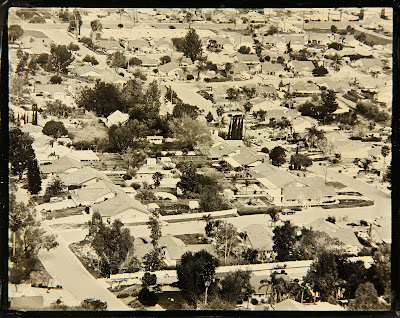 I call that composition 'American Suburbia, As The Eagle And Wild Goose See It'.  If you catch the reference in that title, then you are true photo nerd and that's great.

The rest of the road was pleasantly uneventful and Gilli was placed in her holding spot until next time.
These past week I have been busier than I have been in a long time - gathering supplies and trying not to forget to wrap up a number of things large and small, before a 3-week cross-country trip mentioned above.  At this point, there's less than 48hr left until I leave and things seems to be falling into place, even though some of them have the trajectory that looks like it will put their finalization awfully close to Go Time...  Hoping to have time while on the road to write at east 2-3 updates, so the next blog entry doesn't end up being yet another mini novel like some of the ones from summers of 2012 and 2013...

Anton
Posted by The Photo Palace Bus at 8:29 PM 1 comment: