Summer of 1997 was the pivotal year.
In the spring I, a recent Russian immigrant and a photo-enthusiast, was taking a combination-course at Palomar College toward the fulfillment of the prerequisites for a degree in bio-chemistry.  It was no ordinary course as it combined philosophy, religious studies and critical thinking under one umbrella. It was taught in a large auditorium and had 90+ students.  In that class I met people and was exposed to ideas that would shape my path in life and steer me onto the path of becoming an artist.
I became friends with Melinda and introduced her to another one of my school chums - Ryan.  They quickly hit it off and we all spent a lot of time together.  Little did I know that one week before the finals I would find myself in a Greyhound bus, on a ticket bought for me by my new friends, headed to Northern California for a summer adventure of a lifetime.  Among other wonderful stories that are still fresh in my memory is the moment that I envisioned The Photo Palace and I shall regale You, me dear reader, with it now.
That summer was my first time attending an annual celebration of spirit called The National Rainbow Gathering.  These have been held since 1972 in various states and across the globe and that year it was in north-central Oregon.  There I camped in the area known as Bus Village - a large woody meadow with large vehicles strewn about. Among them was a bus which housed a glass-working space operated by an artist named Bear (or is it Bare.... I didn't ask for the spelling).  The back of it had a kiln and a work-bench, major vents and some more equipment known only to the torch-workers. The front part was a living room space with all dark wood finish, which made it feel more like a log cabin than a vehicle. To solve the bedroom dilemma a cut-off VW microbus was fitted on top and along the perimeter under the windows, in small planters, grew various tomatoes, chives and other greens.
The thought of a traveling darkroom was firmly planted in  my head. By 19 I have been involved with photography for 7 years and the thought of being an artist had been floating around in the back of my mind for quite some time.  Now I could see it - a traveling darkroom in a BUS!  A working space that is also livable and mobile.  How much better can it get?  Unfortunately at that time I was flat broke and the idea had to be put on the back burner.
When I came back from my travels I switched my major, got a degree from Palomar and went on to study photography at San Jose State University.  During my studies I learned about such amazing photographers as Prokudin-Gorsky, Irving Penn, Richard Avedon, and Weegee.  All of them made stunning photographs while constantly on the move.  Moreover, a lot of photographer had not only a studio component to their traveling rig, but along with it a fully functional darkroom.  The idea of the bus was eating deeper and deeper into my brain and was at the same time becoming more defined. The necessity of the addition of a studio space became clear.
All along one nagging thought kept buzzing around like a tired fly on a hot summer day - what am I, an artist who can barely change the brakes on a Toyota Camry, am going to do with a 22.000 pound monster like a school bus?  That fear kept me from plunging into this project with full force.  For 10 a number of years I kept collecting equipment with a mantra or "I'm going to do it, I'm going to do it...". By the time I met Ryan in the summer of 2007 all was in place and the tension was reaching crescendo, but that part of the story is best left for another short story of it's own.
Anton Orlov
ॐ
Posted by The Photo Palace Bus at 4:17 PM No comments:

My First Post - The day I met my destiny.


This is my first post. It is filled with real Polaroid photographs from the day when I met my new destiny.


For 33 years I have been a school bus - driving kids back and forth to and from school with an occasional field trip here and there. I was loved very much and maintained for a number of years for use only during parades and other special events. When I had to be discharged from my original district there was a party held in my honor and to say goodbye to me some teachers came out of retirement.


On a sunny July day in 2011 I met my new owners - Anton Orlov and Ryan Kalem. They are die-hard photographic artists and are now building me up to be The Photo Palace! I will feature a darkroom with two enlargers and a fold-out north light studio. I will travel the country and host demonstrations and workshops on the art of traditional photography, participate in art events all over the country and hold free portraiture sessions everywhere I go. This is very exciting and I can't wait to hit the road.


Currently I reside in the mountains above Santa Cruz. Please watch for updates on the building progress and drop a line if you would like to be the first to be visited by me when I'm ready to go.


Enjoy the pictures - real Polaroids are hard to find these days and I'm honored to have had my likeness captured with such unique and rare medium. 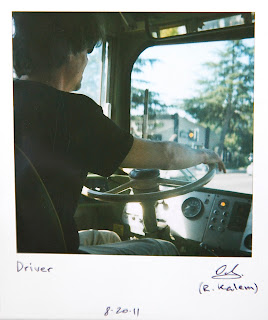 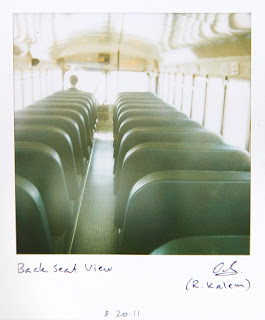 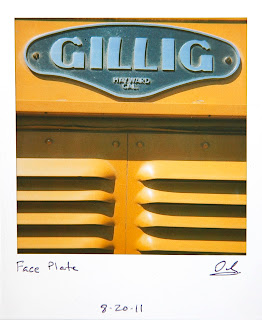 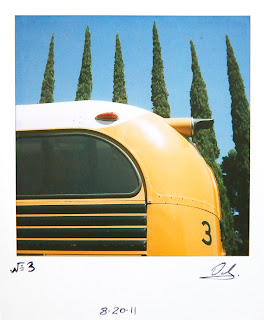 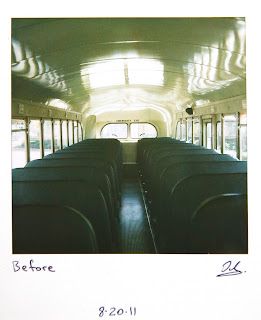 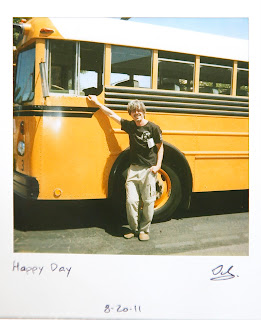 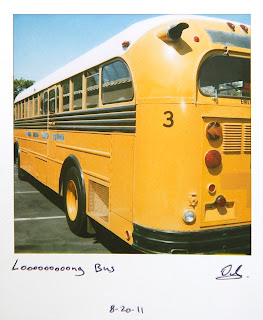 Posted by The Photo Palace Bus at 10:18 PM No comments: