My personal fascination with photography started early on in  my life when at the age of 12 I learned how to develop and print black and white images. I have been hooked ever since and now I would like to bring that experience to as many people as I can in order to not let the art and craft of the darkroom go extinct.

What is a gelatin silver (GS) print? - It is a chemical print achieved by exposing molecules of silver salts suspended in gelatin on the surface of paper to light and then developing out the image. At one point Kodak company alone was putting out over 100 various gelatin silver papers to satisfy every taste on the planet. And at that time there were also Afa, Du Pont,  Oriental, Luminos, GAF, Ilford... By now, we would be lucky to find 50 various papers from all the manufacturers left today. Fewer and fewer people can tell a well-printed darkroom print from a cheap grocery store photo lab print.

What are the differences between a GS and a digital print? - The main difference in my eyes is that every gelatin silver print was created and inspected by the artist vs. a digital print may have never seen the artist who took the picture and may have been printed not to that artist's standards. Then there is the actual visual difference - a gelatin silver print has an infinite amount of gray scale while a digital print does not. Also in GS prints the light travels through the surface of the print, reflecting back at the viewer through the darker areas, while in an ink-jet print the light is stopped and swallowed up by the pigment, resulting in a much duller look. Finally - a well processed GS print is guaranteed to last at least 150 years without fading, crackling or glazing - how many digital prints can claim that with any degree of certainty?

What is my favorite part of working in the darkroom? - I love it all, I must admit. From the anticipation of waiting for the latent image on my film to be developed, to making all the final and minute adjustments to see the final print come to the state that I envisioned, to spotting the print and making it look flawless. I think the activity that I continually get artistic satisfaction from is that moment when I carry out the final print into the light for the first time - the paper is still wet and gleaming, the print is fresh and has only existed for minutes and the satisfaction of seeing the tones fall into place overwhelms me every time.

Why encourage others to work in the darkroom? - I think there is a sense of dignity and dedication that comes with the darkroom experience. Time gets transformed and outside world fades when one is really involved in making that final print and the experience reaches the realm of Art Meditation. After printing, an artists can safely say that they are fully responsible for what is pictured on the sheet of paper and they feel more connected with the image because of the time invested in their creation.

The print below was made on the last of Luminos Tapestry X fiber paper that I found in a local photo store. Luminos put out some of the best papers for over half a century before folding under the weight of digital tide in early 2000s. This 20x20in print shows the texture of the paper and how wonderfully it blends with the natural textures of urban subjects.
Captured on Rolleiflex Wide camera and Agfa APX100 film (not also extinct) 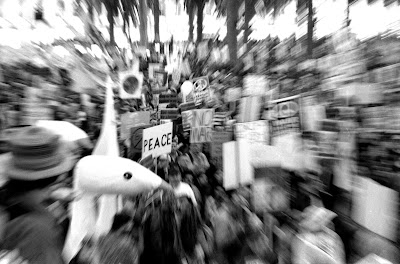 Posted by The Photo Palace Bus at 8:15 PM No comments:

The buzz is out.

New year started with a few new articles written about the project:

An article on Lomography.com:
http://www.lomography.com/magazine/lifestyle/2012/01/02/the-photo-palace-bus-needs-your-help

Interview with Yours Truly by a brave new blogger and photo artist (he might be new to blogging, but he was a very thorough interviewer):
http://www.photostudious.com/study-film-photography/2011/12/28/the-photo-palace-bus-interview-with-anton-orlov.html

An post by young Film Junkies from London on Filmsnotdead:
http://filmsnotdead.com/blog/2012/01/02/the-photo-palace-bus/#more-5163

A fun short article about which I didn't even know on popphoto.com :
http://www.popphoto.com/news/2011/12/kickstarter-photo-palace-bus-would-be-mobile-darkroomclassroom

Overall, by now, there is a general abundance of information on us, so feel free to google us and read what the world is saying about this venture.

Thank You All!
Anton.
Posted by The Photo Palace Bus at 5:20 PM No comments: