Here's something you don't see every day, so I think it deserves a post.

The other day I was alerted by my friend Rob McElroy about the existence of an antique store that recently purchased a large photography estate.  Among other things Rob collects antique books on photography and asked me to investigate if I can spot some books there similar to the ones that have already been put on eBay by the store.

I drove up 100 miles to the store and found an incredibly cluttered little shop filled with furniture and other trinkets stacked on top of each other at least three levels high.  The back room, however contained the photo gear and it was a delight to see.  In fact, I'm not done there just yet and am going back on Saturday on my way to interview a wet-plate photographer in LA area (look for that interview in the next post).  There are dozens of wooden cameras from late 1800s, hundreds of lenses and shutters of all makes and kinds and thousands of parts and supplemental to cameras of any sort (sadly, most of them probably hopelessly and forever disconnected from their original counterparts).  I dug around for about 8 hours and am probably still yet to see all that there is.

One of the cameras that caught my attention right away was a French stereoscopic camera called Jumelle Bellieni.  I knew that I had to have it for my collection even though it was missing the focus-synchronizing bar and dark slide.  Here is a link to some pictures of one that is in better shape than mine.  It's a pretty neat-looking piece of equipment and, even if I never take a single picture with it, it will look very nice in the camera museum I'm hoping to open up in my old age.  Thankfully the price I was quoted was reasonable and still leaves me with a bit of diesel funds for the upcoming second journey aboard The Photo Palace Bus.

When I got home I was anxious to figure out everything about the inner workings of this camera.  First order of business was to clean it.  Everything in the collection that was acquired by that store is covered with a thick layer of dust and grime and it took quite a few Armorall wipes to get the leather to gain a presentable look.  Then came the Carl Zeiss lenses - I carefully took them apart and wiped them to the  best of my ability.  I can't say they are in great shape, but at least I got the majority of fog off of them.  I started to run out of things to clean on the outside of the camera, which naturally made me wonder what it looks like on the inside.  After a good while of looking for the back release I realized that there is none present entire back can be slid to one side.  The plate pressure springs jumped out at me like a couple of live and angry rabbits (the Monty Python And The Holy Grail kind).  Naturally I thought something was awry as I am not yet used to camera parts charging in attack mode.  Luckily I soon realized that I was out of the danger zone and that the two parts acted as they should have been expected to.  Here is where things got incredibly interesting.

Inside each film chamber I found a stack of neat little glass plate holders (12 total).  While 4 of them were empty the rest contained the original thin plates of glass.  The last thing that I ever expected to find though were negative images on those plates!  Each of them seem like they were fully developed!  The glass is clear (I am not sure if dry glass plates had antihalation backing on them and am in touch with an expert to try to find that out) in the dark areas and fully exposed and dark in the light areas.  I am completely baffled by this find, but the images were so intriguing that I decided to scan them.

While viewing the images in their negative form it was difficult to say for sure what was on each of them, but after scanning them it became clear that they dated back to the First World War and were taken somewhere in France.  There were 8 images and they say that a picture is worth a thousand words.  I will spare you from reading another 8000 words - here they are, quite possibly seen for the very first time since their capture.

House in a river after bombardment 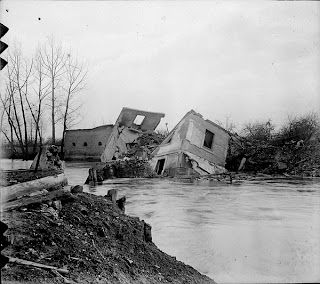 Three soldiers and remains of an airplane 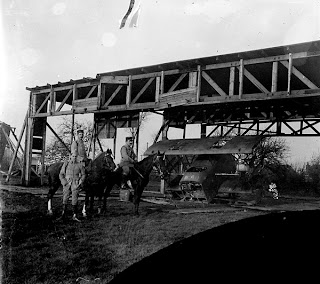 Two soldiers, one holding up a sizable bomb 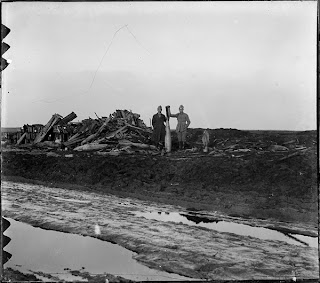 A town showing signs of war 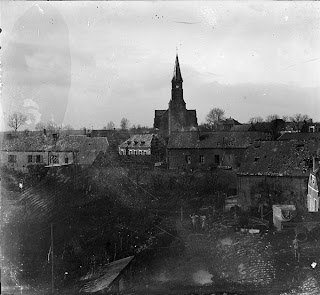 Two soldiers and countryside in the distance 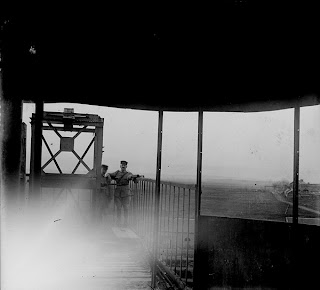 A soldier by ruined train tracks and houses 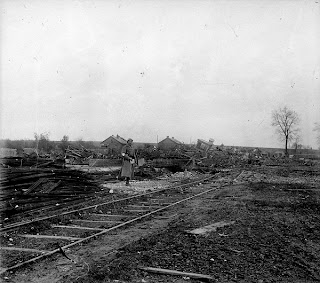 A stereoscopic image of an old house.
This was the only image done in stereo pair.
Large light leak is unfortunate as it would have been fun to print this pair
and view it my old stereoscope.

I absolutely love finding images that likely have never been seen by anyone in the world.
Hope you enjoyed looking at them as well.  If you would like to have some prints of these 100 year old photographs for your wall or collection I would be happy to make real gelatin silver darkroom prints for your collection for a very reasonable cost.  Web-reproduction rights are granted on case-by-case basis, it is my hope that you will consult with me about publishing my find.

Here is a another chance for me to express my personal preference for analog photography.  Let's say you took some pictures with your latest greatest digital camera (perhaps you actually were  present during 911 and got some incredible documentary captures).  Let's suppose that you forget to take the memory card out of the camera and lose that camera or forget about it up on top of some shelve.  Time goes by and, alas, you pass away having lived a long and productive life.  That camera is sold to an antique store 100 years later (if it doesn't end up in a landfill - people seem to value old things less and less nowadays and the incredible numbers in which digital cameras are being produced today make me wonder if anyone will even give a camera from the early 21st century a second look by then).  What do you think are the chances that whoever buys your camera will be able to see the incredible images from your memory card?  Will they have devices that can take a Micro SD or a Sony Stick in the 22nd century?  What if your camera spends 20 years sitting on top of a magnet - will that scramble the images beyond recovery?

If you find this post intriguing I recommend taking a look at the blog entry with images from the First World War period taken in Russia.

Thank You,
Anton Orlov
Posted by The Photo Palace Bus at 12:48 AM