If you ever get a chance to go to Sequoia National Park, take it.   If you live in Southern California, go there again and again.

There are a few places in California, where you can come up and touch living creatures that were already multiple centuries old when current calendar began.  In the heart of Sequoia National Park, there is a forest filled with those creatures and it’s truly a spectacular place to meander around, and forget about the bustle of modern day affairs.  General Sherman, the largest tree in the world by volume, also lives there.   A visit to this natural miracle is something to put on your calendar.  Jozlynn and I spent a day and a half in this enchanted haven, hiking around and observing the rhythmic exchange of oxygen between fauna and flora.  The path wind seemingly forever, and serenity awaits around each turn.
At one point though, upon a boardwalk of Circle Meadow, a most Zen-like place, I had a moment of real fear for my ankles.  While marveling at a tree that seemed to be swallowing a boulder the size of a small house, I heard heavy rustling emanating from the waist-high brush behind me.  Upon turning around, I was confronted with a sight of a grey hairball in the grass, which was a major rodent charging full hopping speed, exactly in my direction.  This thing was moving fast and was the size of a very large cat and it was only half a dozen hops away from jumping on the boardwalk.  At the last moment, I realized it was a marmot, a rather ferocious looking animal with teeth that can do serious damage. I was a bit taken aback by such a brazen wildlife display, so I lost my moment to flee and mentally prepared to start jumping and avoiding large teeth. The next second though saw the creature slip under the boards on which I stood, and in another three seconds he reappeared about on the other side of the path, jumped up on the edge about 8ft from me, and assumed a very proud and still pose, frozen in apparent hopes of being spotted by a potential mate, who was calling out loud yelps from atop the rock I was watching.  There he remained motionless for a few minutes, with no attention whatsoever paid to me as I was inching closer, trying to grab a decent phone shot.  At some point, the apple of his eye noticed him, but he was not to her liking, so, after changing pose ever so slightly in a futile attempt to appear more desirable, he disappeared as briskly as he came.
Other than watching out for sudden perceived threat of wildlife, which can bring unwanted heightening of blood pressure, being in those woods is a very peaceful and recharging experience.
Oh, and watch out for bears if you go there!  Warning signs are everywhere, not a lot of bears in sight, but the potential is strongly emphasized.

Sequoia forest is also a spectacular place to make images in, though rather challenging with slow blue-sensitive collodion process, because of red bark color and all the UV being eaten un by 200ft+ tall canopy.  Sporadic wind gusts also made even large branches and medium size trees sway during long exposures required.  In the last photo published below you can see the dark box setup I had with me.  It’s a shoulder pack weighing about 45lbs, which contains everything needed for making of about a dozen plates from camera to water.  It was built for the Europe trip earlier this year, but it works marvelously in the woods, because it being not too heavy and with no rollers, it’s easy to lug over a few logs to a precise place you want to be shooting at.  With that I made 9 4x5 tintype in 4 locations.  All of them are presented below.  Along with those 9 positives, I also made one wet plate collodion negative, and upon return made a limited edition of 5 8x10 selenium toned gelatin silver prints (the wide tonal range and fine detail of which are not at all well represented by the below image).   Those 5 gelatin silver prints as well as 8x10 archival ink prints from 2 select positives seen below are available in my Etsy shop.  Individual unique 4x5 tintype positives can be purchased for $250 each (2+ at discount of course) - please feel free to email me through contact page here. 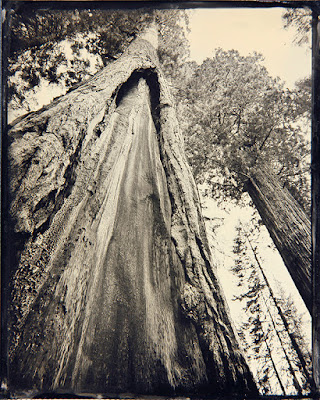 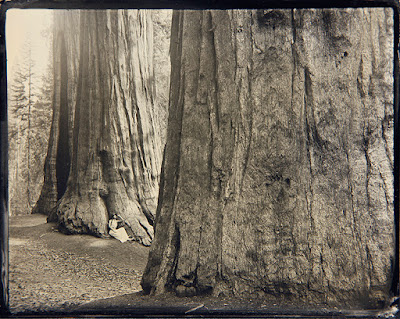 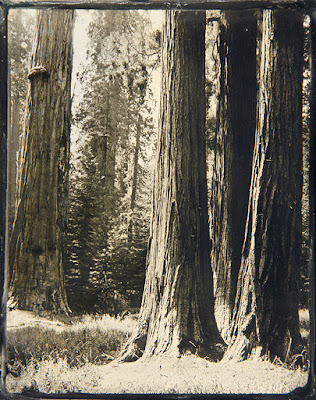 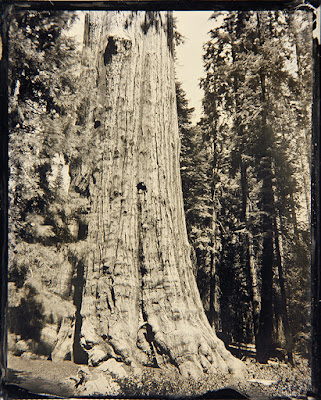 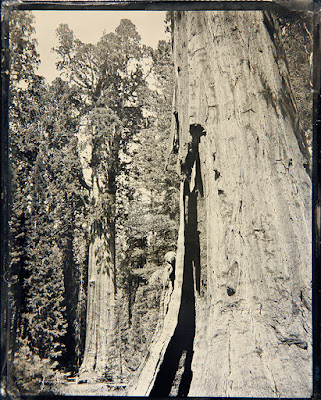 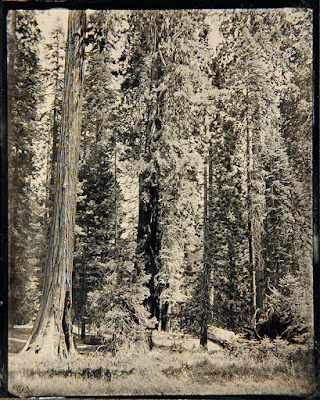 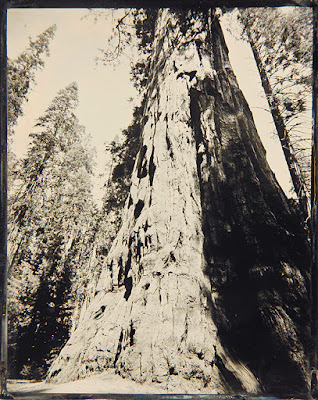 Base of Giant Sequoia
4x5 Tintype 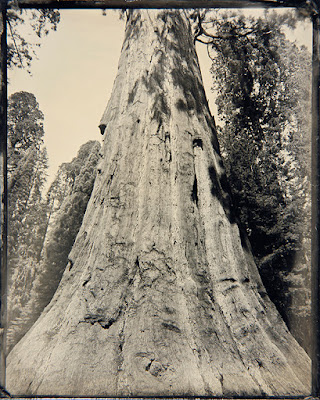 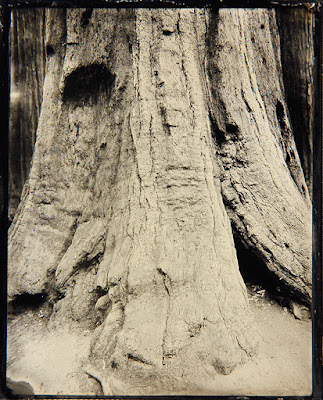 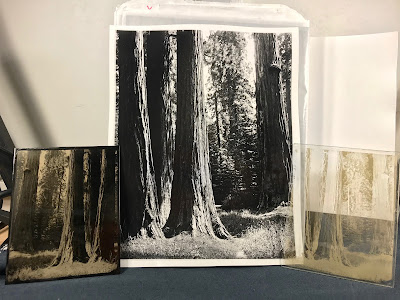 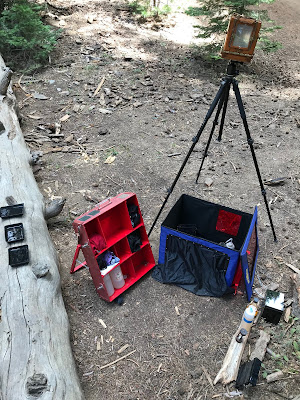 Posted by The Photo Palace Bus at 3:58 PM