Does bigger necessarily mean better?  What about all the good things coming in small packages?

Faced with these questions I set out to have some fun and create world's smallest tintype today.  I have quite a few Minox sub-miniature cameras and so I decided to dedicate one of them to wet plate collodion (after silver nitrate is put through this or even 35mm camera it eats away at the metal surfaces and so working with film after that will be quite impossible).  These little marvels of engineering are astounding and I chose the first commercial variation - model A III from 1950s.  Along with a fast enough f3.5 15mm lens (which is darn sharp I must add) it has a flash X-sync and so I was able to connect it to a Photogenic 1500 monolight.   My dear friend Justin Edelman was available to be my model.
For the support I happened to have some traditional japanned iron sheets done in classic 19th century way.  The best thing about that material is that it's extremely thin and I was able to slide it into the very narrow slot where would normally go.  The downfall of that support is that because it is hand-made it has all sorts of slight imperfections, bumps and so on - thus the final image is not as perfect as I would have liked it to be.  Nonetheless I think it was acceptably clean and so here are the very first and second plates.  Images are 8x11mm and I truly believe that they are world's smallest tintypes. 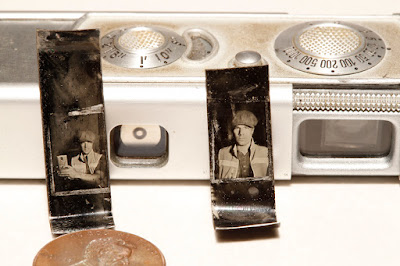 World's smallest tintypes - take one and two, next to the
camera they were made with and a penny. 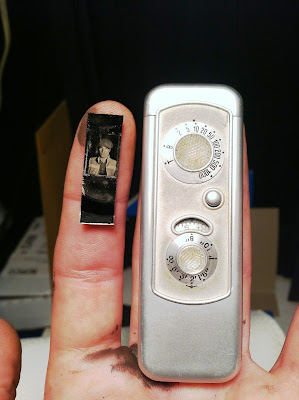 Making a good pour on such a tiny plate was fun - the first one had a coating that was a bit too thin for my liking, so that's why I did a second take, with that one I was really happy. To apply developer I used a pipette.

To dispel any possible doubts about authenticity here's a 2 second video that Justin shot with his phone, which you can see in the first plate, while I was making the exposure.


I'm going to experiment with this a bit more - for example I was to make some negatives and enlarge them. This camera is extremely sharp and so combined with collodion emulsions I should be able to make very sharp enlargements. 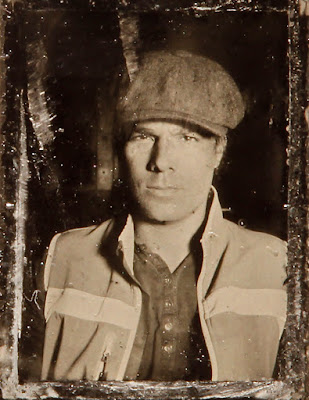 Closeup of the second plate.


I encourage all of you to have fun and push the limits of whatever artistic process you chose to work with in any direction possible!

First off let me say that it was brought to my attention that historically there were indeed smaller images created using wet plate collodion.  The Stanhopes were 2x2mm and were viewed through a special magnifying device.  They were however created in multitude in a special camera that exposed dozens of them onto a single larger plate, which was later cut down.  So I still think these plates stand as being the smallest poured without cutting.

Now onto the actual update.  I wasted no time in taking my little experiment one step further and today I made a negative that I subsequently enlarged onto regular photographic paper.  Because Minox has a special curved pressure plate in it that squeezes the negative into the focal field I had to use a material that is bendable.  I thought about it for only a second before settling on the simplest solution - a cleared piece of regular B&W film.   I cut a few strips so they would fit, cleared them in fixer, coated with collodion, sensitized and made three exposures before coming up with a negative that I deemed worthy of printing.  I did have to use an intensification technique in order to make them dense enough to be printable and, as I am the only one using this method to my knowledge, I will omit the exact details of that particular step.  I will say that most people who make wet plate negatives use a re-development method with which most of them get rather satisfactory results, but, after observing a few people go through the steps involved, I found that method to be too laborious and sometimes unpredictable with a possibility of staining ruining what could have been good plates.  So I experimented a bit and came up with a sure-fire solution with which I have made quite a few negatives by now and which never failed me yet.  Enough about that though - here are some of the illustrations of steps I went through today. 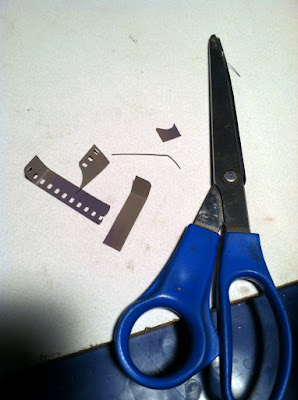 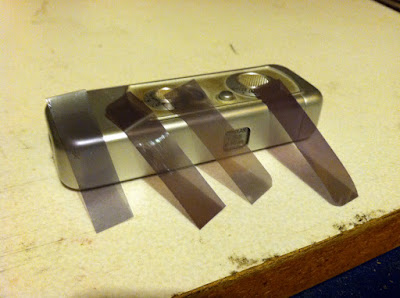 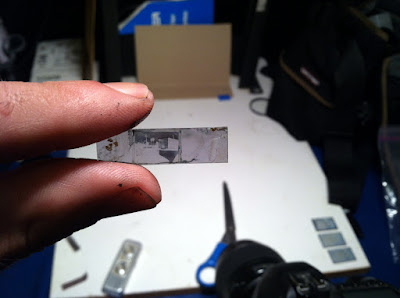 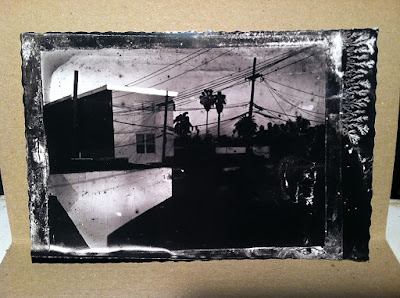 I think the subject matter and treatment are reminiscent of View from the Window at Le Gras by Niepce and I really like it for that reason.  The sun was almost all the way down by the time I made this exposure (I did spend a good part of the day doing a few Becquerel daguerreotype tests, which really do call for a lot of light and thus had to be done first) and my exposure was 1/20th of second at f3.5.  For once I actually love the spontaneous chemical artifacts.  Usually I'm a fan of clean well-executed plates and don't buy into the whole 'hand made therefore imperfect' philosophy that seems to be prevalent among collodion workers and admirers of today.  This however was a purely fun experiment with no preconceived ideas of how it needs to come out, and so collodion doing it's own thing was perfectly acceptable in my mind.

A fun little moment during this ordeal was the floating away of one of the strips off the dipping paddle during sensitizing into the bottom of my bath and me chasing it out of there with repeated flushing using silver nitrate.  I chased it for a good couple of minutes pouring the liquid in and out at least 5-6 times.  I think my determination may have positively affected the outcome as that was the strip that decided to turn yield the best negative.


Anton Orlov
Posted by The Photo Palace Bus at 9:00 PM