George Eastman House and the 3-day $525 GOAL, plus more as usual. 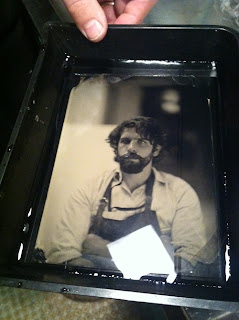 More about this image at the end of this post...  read on.

First off I would like to congratulate Gilli the Bus on passing a major milestone - on the way to Rochester NY this morning she reached the 250.000 mile mark on her odometer.  Here's to Gilli and many more miles together!  Hip-hip hooray! Hip-hip hooray!! Hip-hip hooray!!!
(Image is slightly motion-blurred as it is hard to drive at 60mph and take pictures at the same time...) 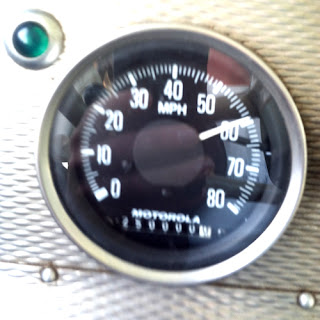 Now - A MAJOR GOAL for the next three days.  I MUST raise $500 to afford to take an ambrotype workshop given this Mon-Tue-Wed at the George Eastman House International Museum of Photography and Film by the guru of darkroom arts Mark Osterman himself.  It would be a major miracle if somehow I would raise this amount - all fingers are crossed...  Come on photo deities, smile upon me a bit more!

Back to the beginning though - I pulled up next to George Eastman House (GEH) at about noon, walked the beautiful grounds and made my way to the main museum entrance pictured below. 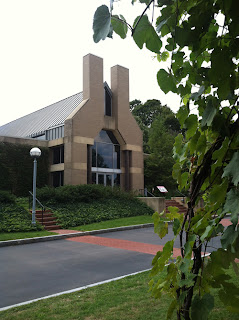 I tried my best to contact someone directly from the front desk.  Of course, as usual, everyone was away from their desks and I got nowhere fast.  Nonetheless I decided to spend the $12 required to get in even though my budget is tight, but this was well worth it.

Inside I found a beautiful little room filled with cameras familiar and new to me.  The light was very dim there and all the cameras were under display glass so iPhone would just not do any good there at all.  Let me just say that that was my favorite 'public access' room there.  On display there they have one of only 3 existing Leica model O bodies, Ermanox in amazing shape,  a Graflex owned by Steiglitz himself, an amazing tri-color camera used to photograph Marylin Monroe (it splits the image 3-ways and sends the light toward three separate 4x5 in sheets of film - this one is well worth seeing), an array of spy cameras including the famous vest-camera and camera built into a walking cane, a big display of Kodak cameras and much much more.  There were probably about 100 cameras all together, but this is just the tip of the iceberg as I understand that GEH is the holder of the largest camera collection in the world consisting of over 6000 cameras!  Incredible - if I make it into that room I'll probably faint...

Walking the photography display rooms was a great joy as well (there was no photography allowed there, sorry).  I must have seen every type of photographic print process ever invented.  From daguerreotypes to platinum they were all there.  In one of the rooms is a quaint little chest with drawers that you can pull out and mounted inside every drawer is a single photograph under glass.  First drawer is, of course, a daguerreotype and then it just goes on from there through the history of photography.  There is an easy-to-follow guide in a booklet on top of the case and I spent a good half an hour pulling out those drawers and marveling at the treasures hidden inside them.  There is an amazing display of woodburrytipe images from London ca.1880, some incredible dye-transfer prints by Edgerton, all 4 original portfolios by Ansel Adams... too much to list or remember.   They do have an incredible book store where I'd love to spend a couple of days and a few thousand dollars as all their books are worth looking through and most are well-worth having in the collection. Luckily photography was allowed there so here's a shot of just one of their nooks. 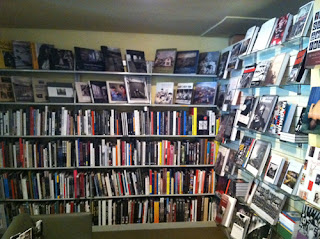 I'll probably be back there tomorrow morning before attempting to sell enough prints to cover the ambrotype workshop admission price...

Next I decided to go bold and pull up in front of the actual residence of George Eastman, which is located just to the east of the museum, and take a picture of Gilli in front of its facade.  I pre-loaded my 4x5 with Polaroid 55PN film and made two exposures with a Stereo Realist as well before being asked to move by a kind, yet firm security guard (I was blocking the entire driveway).  Here is a resulting scene as captured by my trusty iPhone. 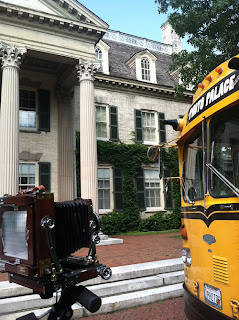 As it happened, while I was wrapping up a lovely lady by the name of Rachel came outside and took a peek inside the darkroom.  Seemingly impresses she recommended that I go back in and do try again to get in touch with Mark Osterman - the man in charge of the historical processes and conservation.  Inspired by that coincidence I re-parked Gilli and marched back inside.  The receptionist seemed baffled and perhaps slightly annoyed by my persistence, but did make a call to try to find Mr. Osterman.  To my surprise and delight after a minute or two down the hall appeared a man in a slightly-stained apron followed by a younger eager-looking fellow.  Mark was the one in the apron and within 30 seconds I found myself walking him and his new apprentice over to The Photo Palace Bus.  Mark seemed to like the darkroom, which was a real honor -  just to have someone like that walk in is a blessing to the space, but not to receive any criticism was beyond reproach.

After a short visit with Gilli we walked back to the museum and I was handed a badge that would allow me to go past the closed doors with 'staff only' sign.  Right after I walked in my heart started to beat faster as I walked past some 20 stacks of 35mm movie film in reel cases and down the stairs into the basement toward their darkroom.  I was IN!

Mark Osterman is an absolute delight to talk to and I only wish I had the amount of knowledge equaling one tenth of what must be stored inside his illuminated brain.  First he took me to the conservation room where he showed me all sorts of prints and displays.  There a whirl-wind of a lecture-show followed, during which I was shown so many wonderful images and was able to handle so many delicate papers that I can barely remember half of them and I definitely could not keep up taking pictures for the illustrations below.  This is what I managed to document.

Here is a real waxed callotype negative negative and a salted paper print made from it: 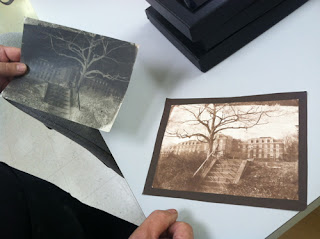 A display with almost every historic process that I know of and then some: 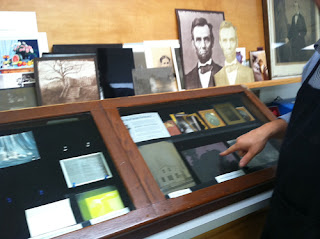 Mark himself with an ambrotype in hand: 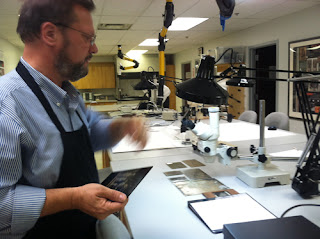 And a comparison of salted paper print and an albumen: 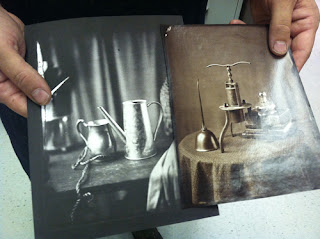 After that we went into the actual darkroom.  This was just like a dream and I almost had an out of body experience - knowing that I was in the darkroom of one of the most respected photographic institutions was quite surreal.  The darkroom was small, but extremely well organized and clean (just how I like them).  There were all sorts of gadgets and machines that once made the craft of photography possible and I felt right at home.  Here are a few shots from there including an 8x10 Durst enlarger - a cousin on the one I have in San Diego (I will say that this one is taller and can print color, but mine is prettier and more stylish) 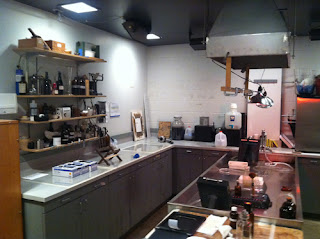 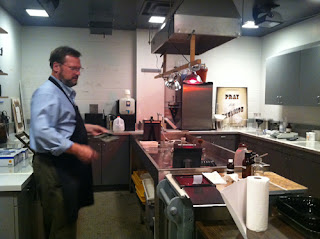 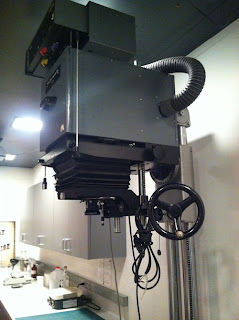 This is one of the two chemistry rooms I visited - incredibly well-stocked and organized this is something I aspire to achieve in my darkroom one day. 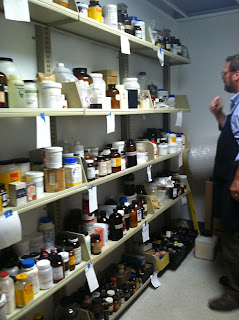 Mentally overwhelmed and exhausted I shook Mark's hand goodbye and floated out into the streets of Rochester - the amount of inspiration received during that short visit made it seem like I was floating for the rest of the day.


Afterward I tried to find a place in town that had used cameras and possibly some more Fuji FP100c or FP100b so I could offer Polaroid prints to people while selling prints and raising workshop money.  To my disappointment I could not find a single store that had that film, but I was recommended to stop by a store called Camera Source.  I called them up and was assured that I would be let in the building past the 6pm closing time.

Located at 36 St. Paul street in a mixed-use building on the second floor this is a great little dive-hole for any analog enthusiast.  It is owned by Dick Raas, who has been in that location since 1971!  Originally he ran a portrait studio at that location and then transferred it into a camera shop.  He deals exclusively with film cameras (and not chemicals or film itself) and has a great selection of cameras of every format plus more darkroom equipment and accessories than one could dig through in one day.  Here are a couple of quick snapshots of the interior of the space.  I highly recommend anyone passing through Rochester to Google Camera Source and call them up and stop by - chances are you will find what you need and then some. 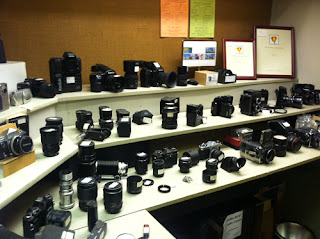 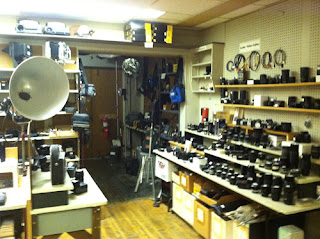 NOW - back to the urgent need to raise the workshop funds!  Here is a test image that Mr. Osterman was preparing for the workshop.  It happens to picture the young apprentice who is, in my view, the luckiest darkroom geek in the world because for the next 1.5 years he is going to tail Mark, learn the art of alternative processes first-hand and go on to be a wonderful conservationist for some major museum.

This is a real-life Ambrotype, still in the ashing bath, and I would LOVE to learn how to make them in the workshop given by Mr. Osterman this upcoming Monday, Tuesday and Wednesday.  It is a three-day workshop and the cost of it is $475 + $50 for material fee.  So now I am completely obsessed with meeting that goal by this Monday.  Any help from my readers is very much appreciated.  You can go to the 'Donate' page located in the top left corner of this blog and make this dream come true.
For any donation over $50 received through that page in the next three days I will send you one of my favorite gelatin silver prints.  For any donation of over $250 received in the next three days I will make you your own original Ambrotype (once I learn how to make them from a top-level professional) and mail it to you with a letter of personal gratitude.  For a donation of $525 (which will cover the entire workshop cost) I will send you THE Ambrotype made during this workshop (most likely it will be a portrait of me), it will be one-of-a-kind like any other Ambrotype image as there is no negative in this collodion process and you will be the proud owner of a completely unique image of the owner/operator of The Photo Palace Bus.
In order to try to cover the cost of the workshop by myself I will try my best to sell as many prints as humanly possible in the next three days after stopping by the George Eastman House in the morning once again.

Thank you,
Anton
Posted by The Photo Palace Bus at 5:51 PM